What does Santa Claus do all the year round? 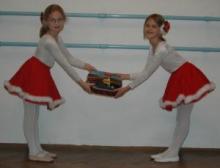 It’s quite something with that Santa Claus. There are masses of discussions and movies all dealing with the question whether he exists or not. All through the month of December or even already in November we are thinking of him, we are waiting for him, we are treating him as somebody important. Yet what happens after Christmas? Do we pack him into a box and store him in the cellar or under the roof, and simply ignore him? But what if he does exist indeed? Where is he all the year round? What is he doing?

It is a lot easier with the Easter Bunny. At Easter time a normal rabbit simply transfers into an Easter Bunny, and afterwards it is a normal rabbit again.
Yet Santa Claus? Could it be that he really is at the North Pole, or is he on vacation on the Caribbean Islands? Yet for eleven months?

Originally Santa Claus comes from St. Nicholas. In the 4th century he had been bishop in Myra, a town in Asia Minor. There are various stories and legends about him, which all have one thing in common: Nicholas loved children, he used to give presents to them, and he helped the poor. His date of death is said to have been on a December 6th. Concerning the precise year research specialists are not quite sure.

In Germany and Holland all kinds of customs deprived from this legend. In all of them St. Nicholas gives presents to the children on December 6th. In some customs St. Nicholas has a big book where everything is written down, whether the children behaved nicely throughout the year or whether they did not do so. He discusses this with the children and then decides whether on December 24 or 25 the "Christmas Child" may bring gifts.

In England St. Nicholas had been called Father Christmas. The settlers that emigrated to the USA in the former centuries had all these customs in their luggage. The name "St. Nicholas" gradually changed into "Santa Claus". Movie industries and commercials used this nice figure and added numerous stories. Thus nowadays in the month of December in all media Santa Claus is found with his red coat and white beard.

With this people more and more tend to forget the real origin of Christmas. This makes sense. A fat and friendly old man without any religious background who in addition brings gifts is a lot more convenient than Jesus.

Jesus says about himself:

"I am the light of the world. No follower of mine shall wander in the dark; he shall have the light of life." (John 8, 12)

Many centuries ago Christmas Eve had been fixed to be December 24th. That is just a few days after winter solstice We don’t know whether Jesus some 2000 years ago really had be born in the evening of a December 24th. This date had rather be chosen because it shows us as a symbol that with Jesus light and thus life has come into the darkness of the world.

Jesus is not a legend or a friendly man like Santa Claus. The life of a person is going a completely different way depending on whether this person is walking with or without Jesus.

You can make a very simple test: Put a plant into a dark room without light. Although watering it regularly, after a while it will look very poor. It lacks light which is essential for life.

With us humans it is similar. Many people don’t even notice that they lack something. They have food and drinks, work and possibly a beloved partner. So why should anything be changed? Yet life is a lot more that eating and drinking and amusements.

Jesus gives a meaning to your life, your life will enormously rise in quality. Have a try! In the New Testament of the Bible you find all necessary information about Jesus.

Feasts of the year