What Does God Think About Dancing? 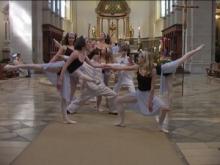 In recent times in some Christian congregations it has more and more become a fashion also to dance in the service. Words like "sacred dance" or "praise dance" have developed. On the contrary other denominations are completely against dance and consider it even as coming from the devil. In other cultures, especially in Africa, it has always been completely natural to dance during the services.
So, I am now wondering: What does God think about dancing, or what does the Bible say about dance?

In the Bible there are quite few passages only that deal with dance. This is one of them, and he who wrote this is putting a similar question as we do.

What advantage do we have in dancing? Does God think it is good when we dance, or should a Christian rather not dance?

Further passages that deal with dance we find in 1. Chronics 15,29 and 2. Samuel 6,14 and 16. Those that are pro dance usually come up with these passages. They don’t only advertise dance in general but they mainly promote sacred dancing, praise dance or whatever you may call it.

And David danced before Jehovah with all his might; and David was girded with a linen ephod. (2Sam 6,14)

King David was so happy that the ark of Jehova (the most important sacral object of the Israelites) had been brought into his city that he rejoiced aloud, that he ordered timbrels to be played, well and that he also danced.
The following sentence is this:

And it was so, as the ark of Jehovah came into the city of David, that Michal the daughter of Saul looked out at the window, and saw king David leaping and dancing before Jehovah; and she despised him in her heart. (2Sam 6,16)

There is no further explanation why Michal despised king David. Yet considering the whole story we may assume that probably Michal did not dislike David’s dancing as such, but that she considered it ridiculous that the king danced so joyfully and in such an ecstatic way just because this not very pretty "box" had been taken into the city. This shows that sometimes one person might not understand why another person rejoices, and thus also might not understand his reason for dancing.

In the books of the Psalms, too, we read about dance. It is recommended to us not only to praise god with songs and musical instruments but also to praise him with dance.

Let them praise his name in the dance: Let them sing praises unto him with timbrel and harp. (Psalm 149,3)

The situation is obvious. Stimulated by the girls’ dances the men shall come out of their hidings in the vineyards, and each of them shall take one of the girls to make her his wife.

When dance has such kinds of consequences, can it then be permitted in church?

Let us discuss some important questions: What is dance? What is the use of dance? Why do people dance at all? What consequences can dance have?

Basically we have to distinguish between

In Musicals we distinguish between three steps of how to express feelings: First there is communication by way of speaking. In order to express feelings and sentiments in a more intimate way music and singing is being added. The next step is dance, when dancing feelings can be in expressed in the most intensive way.

This is a general fact that has not got anything to do with the specific kind of these feelings. When speaking you may say good and evil words, you may curse, and you may bless, and in the same way, just more intensively, you can do this with dance.

This also is a reason why many men and women still have the absurd opinion that ballet lessons would be suitable for girls only.

These are just a few examples of what can be done through dance. In the case of emotional diseases there exists dance therapy. Yet also for generally healthy people dance may enrich life and may open new aspects and horizons of feelings.

With dance you may express every kind of human feeling – provided you are at all capable of dancing.

The question whether a person is able to dance or not is a question of education. Every human being has the basic ability to speak. However, when a child never hears any kinds of words, it cannot cultivate the ability of speaking. The most extreme examples are those of children that grew up in wilderness and isolated from all other human beings. Having never had any contact with any human they have not developed any kind of human language. Yet after such a contact they were very well able to learn a language. Every new born baby has the ability to learn all sounds of all existing languages. Depending on the country that he or she is being brought up in, the child will then continually practise certain sounds, and other will diminish without being noticed because the child never hears them.

The more and the wider the variety is that a child is being put into contact with speech, the more intensively a certain language will be learnt, and the more eloquently the young person will become able to express his thoughts, feelings an sentiments through speech.

In many central African countries on the contrary children have been learning how to dance from early childhood on, just as they are being taught to speak. Thus it also is natural that in church people dance as well. People praise God by dancing just as they do it by singing, playing music instruments or by mere speech. In church they even dance more than at other occasions because with dance they are able to express their praise in the most intimate and intensive way.

Most people from central Europe are not able to follow those kinds of expressions. Due to their education lacking dance this is just logical.

Have you ever been in the company of people that speak another language? Somebody is telling a story, everybody is listening, and suddenly everybody is laughing about the joke, just you are sitting there, and you don’t understand anything. In order to understand the joke it is by far not enough that you know a few words in this other language.

People who have never had any contact with dance would feel in the same way when suddenly being confronted with such a way of moving. They might admire the physical abilities of the artist on stage, and they might applause with admiration.

Yet is it possible to praise God with such dance in the way the writer of the Psalms is suggesting it? How is it possible that somebody praises God from the depth of his heart when at the same time he is busy concentrating on putting the right foot into the right direction in the right speed according to the music? When never having learnt how to play a musical instrument, then I am not able to take one and right away to praise God with it. This would not work.

Even when you are used to singing, as soon as you are learning a new song you first concentrate on the words and the tune, and only after a while will you be able to really put your feelings into that song in accordance to what the words mean.

Our bodies can be compared with musical instruments. We can and we may very well praise God with them. Yet we will only manage to do so when just as in the case of musical instruments we will steadily practise all the various exercises. Thus we will gradually gain more and more abilities and skills until we will be able to fully control our movements. Only then will we really be able to express our feelings and to praise God from the depth of our hearts.

Let us hope that some day all children of the world will have the possibility to learn how to dance from early childhood on. Thus they would not only be able to express their feelings with their bodies, but due to the physical training they would be able to keep their bodies fit an healthy and would thus improve the quality of their lives.